Jockey Carol Cedeno entered 2021 needing just two wins to reach 1,000 for her career. And she wasted no time in getting there.

Cedeno won once on New Year’s Day and once more January 2, both at Laurel Park, to conclude the day with an even 1,000 wins from 7,362 career starts. 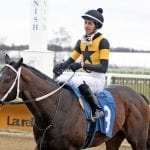 Her milestone win came aboard the Miguel Vera-trained Perpetrate in a $16,000 claiming race for horses that had never won two races. Perpetrate bided his time in mid-pack early in the one-mile test, came wide for the drive, and narrowly prevailed, winning by a head over the even-later-running Hard Sting, who was a neck better than Martini Lane.

Perpetrate did drift in during the stretch run, and Cedeno and her mount had to survive a claim of foul to get the win.

Cedeno, a native of Puerto Rico, won 112 races in 2020 to mark the third time in five years she surpassed the century mark. It was her fourth 100-win season overall in a career that began in 2007. Her mounts have won combined purses of more than $24 million in that time.

Cedeno has in recent years become particularly well known for her work at Delaware Park, where more than half of her wins have come. She’s been the leading rider by wins at that track six times and also holds the single-day wins record there. She won seven races on the July 11, 2018 card at Delaware to surpass the previous record of six, which was held jointly by six riders.

Cedeno has placed in the top 100 nationally by wins twice – 2018 and 2020 – and by earnings twice, in 2016 and 2020. Though she hasn’t won a graded stake – yet – she’s placed in a couple of them in limited opportunities and last year was second in the Grade 2 Delaware Handicap aboard Saracosa for trainer Cipriano Contreras.

Cedeno is named on five horses for Sunday’s Laurel program.